Pairs testing is the basis of the treatment of Therapeutica biomagnetism, so it is necessary to understand how it works. Testing allows locating biomagnetic pairs, which account for the pH (energy) imbalances of the organism.
The entire body is scanned by testing all the spots listed in the Protocol section with the north or negative pole of the magnet. At each point the leg length is checked. In the points where shortening of a hemibody is present, the positive pole (also indicated in the Protocol section) is searched for, to complement the biomagnetic pair.
Dr. Isaac Goiz explains that the left hemibody remains in its dimension while the right is the one that gives us the manifestations of elongation or contraction. Phenomenon also known as the intelligent muscle response. In this way we can identify the altered organ or body disorders. Through this method, we can now detect the presence of more than one thousand biomagnetic pairs1 fully identified and the effective treatment of these pairs and all those still under study or unknown. 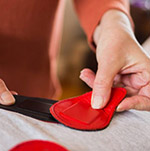 The best way to test the biomagnetic poles is with the patient supine (face up) on a firm base, preferably made of wood or insulating material to avoid interference with the magnets. Clothing should be light and preferably made of cotton, although it can also be made of light synthetic clothing. It is convenient to leave the patient's shoes on since they allow the shortening or elongation of the right lower limb to be assessed. The spots are tested with the negative pole of the magnet. In each of the points the dimension of the right leg is checked for which the patient's heels are taken and the legs are raised about 30 ° where any alteration is more palpable. When finding some altered point, the lower limbs have a difference that ranges from 1/2 to 2 inches. Once one of the poles is found, its counterpart is found, which is shown in the drop-down menu of each of the points of the scanning protocol.

By placing the negative (-) and positive (+) magnets it is checked that the lower limbs recover their normal symmetry. This indicates that both magnets have been placed correctly. Otherwise it will be necessary to adjust the position of the magnets or change the polarity.

Biomagnetism treatment consists in the depolarization of the biomagnetic pair, for which the magnets are placed for twenty minutes3 to restore the pH balance in the affected organs or points.

Finally, the effectiveness of the treatment is checked by removing the magnet (+) and checking the symmetry with the method indicated above (raising the patient's legs).

In the same way we proceed to impact (depolarize) all the pairs found by tracking. Typically, biomagnetists depolarize the pairs that are found along the track. That is to say, when identifying a pair, the magnets are left at the corresponding points and the tracking protocol is followed.

Special case is presented when a reservoir is found, in which case the corresponding pairs will have to be traced again.

1. At present it is difficult to identify the number of pairs as new pairs are continuously discovered either by Dr. Goiz or by other biomagnetists.

2. In testing by shortening the hemicibody is the technique taught and practiced by Dr. Isaac Goiz Durán, in addition other techniques can be used by testing other parts of the body or using other means such as kinesiology (pendulum).

3. The time required to depolarize a pair depends on several factors, including the patient's condition and the degree of energy imbalance. Geographical location also plays an important role. As a general rule, less time (3 minutes) is required in localities close to the Earth's equator, while in latitudes near the Earth's poles the time may exceed 20 minutes. We have no data on the practice of biomagnetism in polar regions.